Screaming at walls : The intriguing appeal of Futuristic and Dystopian literature. 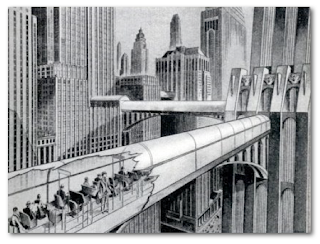 I would never say I was a fan of fantasy novels, but then there is Tolkein and Ursula Le Guin's novels. I do not get the fascination with sci/fi, but what about Jules Verne and HG Wells, arguably the fathers of the genre. It is easy to like the science fiction of these men, as we as a society, are catching up with moon rockets and submarines, computers, robots and lasers. It is not as hard to fathom such technologies, as I imagine it was, reading about these things at the dawn of the twentieth century. Remember that on Tuesday, 3 June 1952 Tintin walked on the moon, whereas NASA did not get Armstrong on it until July 20, 1969. So those reading the book before 'one small step' were reading 'fantasy', a man on the moon indeed! But underneath all of the gadgetry and one piece silver suits of the genre a desire to attatch a parable arose.

When Aldous Huxley wrote Brave New World he claimed he was inspired by the H. G. Wells' utopian novel Men Like Gods, where a parallel world refers to earthlike days as 'days of confusion'. Wells' story an optimistic vision of the future gave Huxley the idea to write a parody . Contrary to the most popular optimist utopian novels of the time, Huxley sought to provide a frightening vision of the future. Interestingly enough, Wells had already put out, 'The Sleeper Awakes' (1899) some thirty three years earlier.

One name that springs to mind is George Orwell. The quintessential novels of dystopia 1984(1949) and Animal Farm(1945) were penned in the 1940's and warned of oligarchial collectivist societies and Stalinism. Much of the inspiration behind Orwell's ideas came from his experiences with governmental Myopia (short sightedness) internationally and his commitment to his democratic socialist ideals.

According to the Oxford English Dictionary, a "dystopia" is: "An imaginary place or condition in which everything is as bad as possible; opp. UTOPIA (cf. CACOTOPIA). So dystopian n., one who advocates or describes a dystopia; dystopian a., of or pertaining to a dystopia; dystopianism, dystopian quality or characteristics." The example of first usage given in the OED (1989 ed.), cites "1868" writing by John Stuart Mill: "1868 J. S. MILL in Hansard Commons 12 Mar. 1517/1 (the first known use of dystopian) is a speech given before the British House of Commons by Mill in 1868, in which Mill denounced the government's Irish land policy It is, perhaps, too complimentary to call them Utopians, they ought rather to be called dys-topians, or caco-topians. What is commonly called Utopian is something too good to be practicable; but what they appear to favour is too bad to be practicable."

For a list of further literature: http://en.wikipedia.org/wiki/List_of_dystopian_literature
Posted by PAPERBAX at 2:42 AM No comments: