Amongst the pomp and ceremony at top English boys school, Eton College, one can be made to, for more serious offences, chalk out the Georgics (more than 500 hexameters) by their House Masters or the Head Master. The giving of a Georgic is now extremely rare, but still occasionally occurs. Also on the theme of farming, suspension was known as 'rustication', derived from the latin 'rus' or countryside as the boys would be sent home. 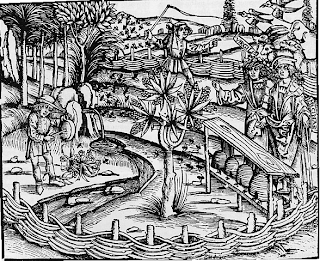 The Georgics is a poem in four books, likely published in 29 BC.[1] It is the second major work by the Latin poet Virgil, following his Eclogues and preceding the Aeneid. It is a poem that draws on many prior sources and influenced many later authors from antiquity to the present. Scholars have often been at odds over how to read the work as a whole, and puzzled over such phrases as labor omnia vincit / improbus (1.145-146), which is not simply the platitude, "work conquers all," but "shameful work conquers all." As its name suggests (Georgica, from the Greek word georgein, 'to farm') the subject of the poem is agriculture; but far from being an example of peaceful rural poetry, it is a work characterized by tensions in both theme and purpose.