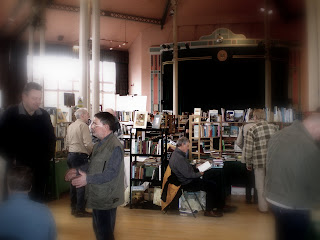 Another top PBFA book fair, this time Buxton in the Pavilion. Several treasures found, at bargain prices too. A signed copy of Alan Bennett's 'Writing Home'; A beautifully illustrated 1919 copy of Lewis Carroll's 1869 'Phantasmagoria and Other Poems'; A translated 1st ed. of Satre's The Reprieve (Le Sursis); A 1910 1st Ed. of E(dith) Nesbit's 'The Magic City', illustrated by H.R. Millar and a 1949 good condition 'Biggles Defies the Swastika', 1941. 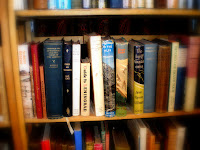 The one that got away, a first edition of Bunting's Briggflatts, not a bad price. I was just niggardly at the purse strings.  Also some of the shelves on display, including, Marple Bridge's Talisman Books. Below is the second stanza from Bunting's text:
"A mason times his mallet
to a lark’s twitter,
listening while the marble rests,
lays his rule
at a letter’s edge,
fingertips checking,
till the stone spells a name
naming none,
a man abolished.
Painful lark, labouring to rise!
The solemn mallet says:
In the grave’s slot
he lies. We rot."
My Finds :

Above: H.R.Millar's illustrations from 'The Magic City' 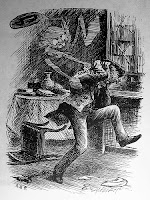 Arthur B. Frost's illustration's from 'Phantasmagoria'.

Essential reading Capt. W.E.Johns with quintessentially English 'fly boy' Biggles fighting the Nazi Luftwaffe. Alan Bennett's thoughtful observations and silent sighs and meanderings from Satre's colourful repertoire.
"...But what is it all about, what am I trying to do, is there a message? Nobody knows, and I certainly don't. If one could answer these questions in any other way than by writing what one has written, then there would be no point in writing at all."
- Alan Bennett, Writing Home, 1994.